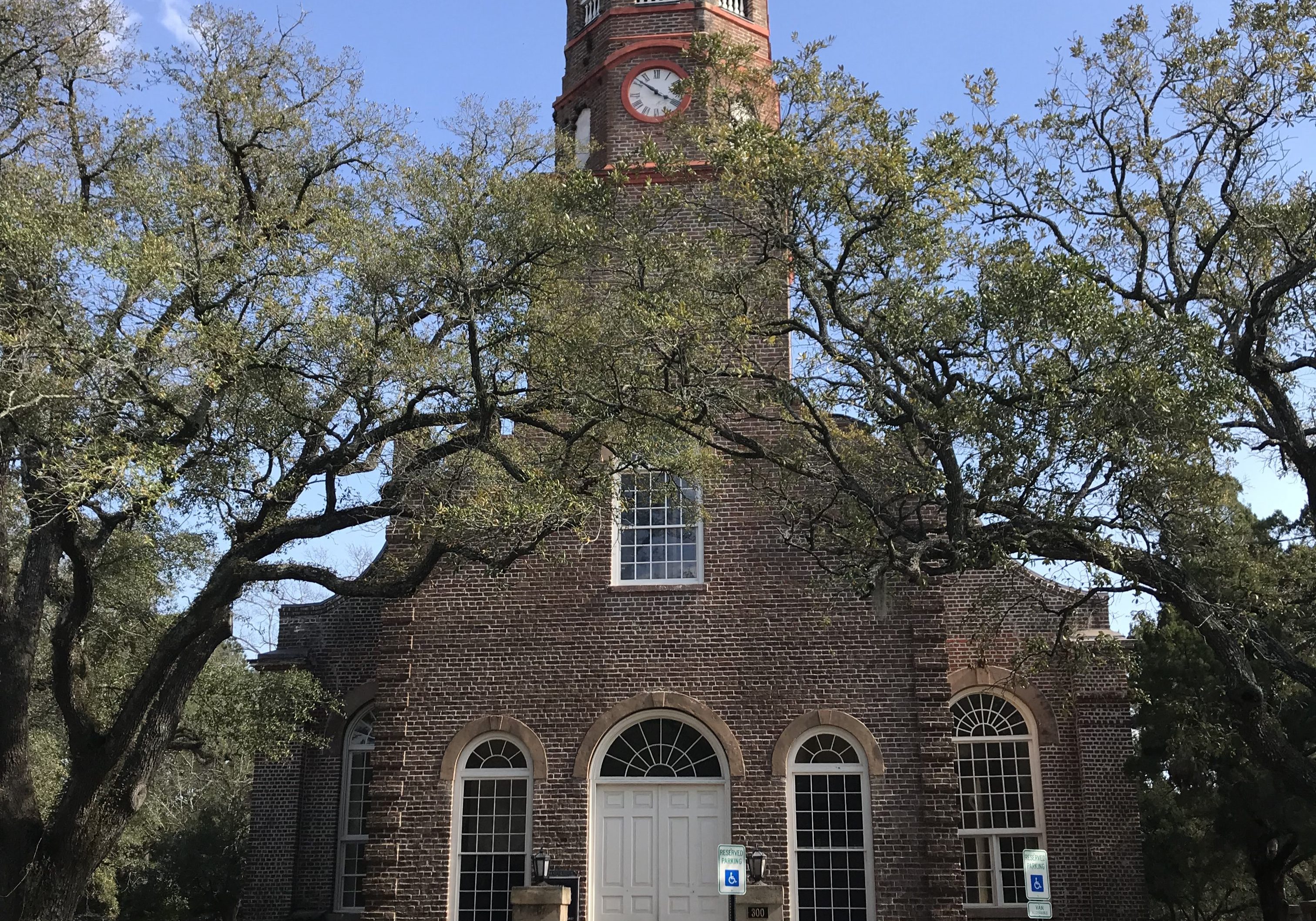 Come Sail With Us in

Here are some of the areas that we have visited. See our thoughts on the Church experience and things to do in the area after church.

Featured Cities and their Church

North along the coast from Charleston is one of those special little towns that are thrilling to discover. Just off the intercoastal waterway, the marinas are nestled along the river banks and quite tight. In fact, it is almost impossible for me to get my boat into Georgetown, but if you are on a sailboat that doesn’t draw too much (although there is deep water) and not wide abeam, it is well worth a stop. The waterfront area is historic, the surrounding streets filled with stately old homes and two museums (the Rice Museum and the Gullah Museum). Getting to the church is an easy stroll from the harbor just walk up Broad Street. There sitting on the corner at 300 Broad is the oldest parish in continuous use in South Carolina. The church built in 1741 is very old and features the kind of pews found in other early colonial churches. Each pew is a box that was occupied by families. These pews were easier to heat with charcoal heaters brought by the families as the church had no heat. Outside the church, there is a major cemetery. The churchyard is quiet and elegant and somehow comforting to stroll among the headstones symbolizing the continuity of the community over hundreds of years.

A note about the name, it was named for Prince George, later King George II of England and at the time it was founded the county or parish the church served was Winyah. Winyah never took hold as a county, and as Georgetown expanded and state government revised the establishment of counties, Winyah remained only in the history of the area and the church.

When I first discovered Prince George Winyah, I was struck by the odd name and heavy emphasis on the Anglican tradition of the church. The website refers to being an Anglican community. I was a bit put off by this because I was concerned that this was one of the breakaway parishes that broke off their association with the Episcopal Church of the U.S., in what is referred to as the schism. However, a quick check of the parishes included in the Diocese of S.C. confirmed that Prince George was still in the fold. The website does an excellent job of relating the history and the congregations approach to the faith. In fact, some of the descriptions are exemplary. It is probably worth noting that the current rector, Rev. Thurlow, is known for his opposition to same-sex blessings and marriages. So, one can expect a pretty conservative approach to the faith and the service. Since you are just sailing through you need not worry about the parish politics just enjoy this beautiful, historical and lasting example of faith through the centuries. As you sit in those box pews, try to imagine what it must have been like in 1760’s, the experience and the tours given by the church are well worth the visit.

At the foot of Broad Street, there are two restaurants I would recommend for lunch after church. Both in the same building and both with water view tables either is an excellent choice but slightly different in style. Big Tuna, 807 Front Street, is a rough-hewn space with an outside deck. Every time I have been to this restaurant, there is a line which just happened to be at the bar. So if you are willing to wait, grab a drink and try chatting with Sassy the parrot. The food especially the She Crab soup and the gumbo make the waiting easy to forget. I also like the steamers, but if you are accustomed to New England steamers, you will be surprised by the diminutive size of S.C. steamers. The oyster po’ boy is also an excellent choice. 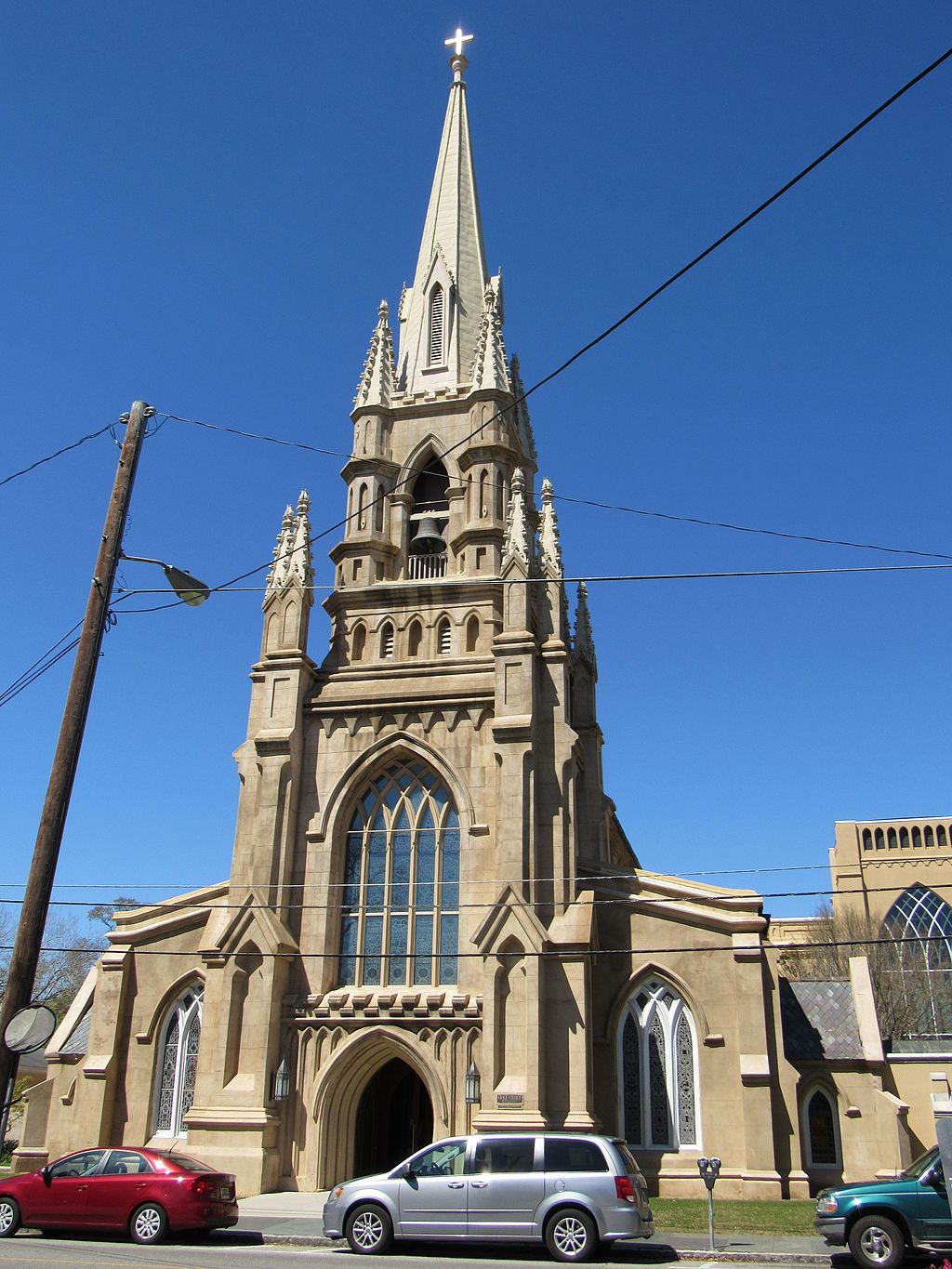 Built in 1848, this is a spectacular church. The architect was the renowned E,B. White whose often designs emphasis gothic elements and Grace Church is no exception. Grace Church is a large grand building which put merely, soars. The seat of the Episcopal Church in South Carolina, the church is worth a visit even if you don’t attend a service. The grandeur is made all the more interesting by the nooks and arches you can explore. The stained glass is what one expects in a church like this and beautiful in the craftsmanship. A service here is a chance to zone out from the everyday world and be swallowed up in the glory of such a place and added to this submersion into a spiritual escape is the fantastic music for which the church is well known. I was lucky enough to attend the midnight Christmas Service here and it was spectacular! The music was fantastic and the walk back to the City Marina in a mild, late stroll was just the perfect way to bring in Christmas. Once point, as terrific as the experience at Grace was for all the reasons above, this is a very big church and a large congregation. Unlike some of the other parishes I have visited, the members are not quite as outgoing or as enthusiastic when welcoming new people. This should not be misconstrued to mean that you are not welcome or will be made to feel unwelcome, it is just a bit different. I suspect that in large part this may be because it is so big and diocesan center making it difficult to single out newcomers.

Grace Church is in the historic area of Charleston, and there is plenty to see on your walk. Depending on the route you choose you will see The College of Charleston, and any number of beautiful, historic homes. Charleston, after all, is one of the great destination cities in the country. It was also the location of Top Chef in 2016. The story is that so many of the great American chefs loved Charleston they all opened Restaurants they’re making it an”eating” city on a par with New York or New Orleans.

I cannot say enough about the Charleston City Marina.  It is one of the best places I have ever been in my adventures. The staff is very cordial and helpful. A large number of service providers are available for repairs; there is a large liveaboard community that makes the whole place exceptional. Plus there is not only a gas station and convenience store on the grounds but also a wine and liquor store that offers a great selection of wines. Two other things that are high on my list at the marina are the constant parade of dolphins swimming by and breakfast at the Marina Variety Store Restaurant. Downstairs is Salty Mikes bar also a place to relax in the afternoon, watch the sunset and look for dolphins.

If you want something in the Top Chef category or a more elaborate lunch/brunch I would recommend McCrady’s Tavern, 2 Unity Alley, Charleston Phone: (843)577-0025, reservations are a good idea. Finally, if you are a Forrest Gump fan and don’t mind a touristy but fun spot stroll down to Bubba Gump Shrimp Co., 99 South Market. Yes, it is a chain and yes fried food is featured prominently, but it is in a great section of the city by the open market and jumping off points for carriage rides or ghost walks.